The American Woodcock is one silly-looking bird. Plump and roundish, it has a long fleshy beak (for feeding on earthworms), big round eyes (for excellent night vision), mottled leaf-like coloration (for protection from predators), and it bobs up and down when it walks (to the delight of all who watch).

Ranging over most of the East (see map below), woodcocks are members of the shorebird family. But unlike their more aquatic brethren who prefer beaches and shorelines, they inhabit forested areas with clearings and feed in moist, swampy spots, inserting their long beaks into the mud to locate and extract earthworms (the tip of the beak is actually flexible).

Among nature lovers, the woodcock is best known for the springtime courtship display of the male, given both on territory and during migration. At dusk, and then again at dawn, males fly to old fields where the ground cover has been battered down by the winter snow, rain, and wind. There, each male takes possession of a “display territory,” which he defends from other males.

Strutting about on the ground in the darkness, the resident male gives loud, nasal peent calls that are preceded by soft throaty notes. Every few peents, he may wheel around and then calls from a new direction. Periodically, the male launches into flight, rising into the air with a liquid, musical twittering made with his wings (twittering is produced by the vibrations of three narrow outer primaries).

The male spirals upward a hundred feet or more, ascending in large circles until he reaches the apex of his flight, at which time he drops from the sky with erratic movements, all the while making melodious whimpering chirps as he descends. Just before reaching the ground, he levels off, skims along the surface, and then sets down, almost in the exact spot from which he took flight. There, he peents and struts as he did before, and then, after a minute or two, repeats his extraordinary flight performance.

If a female approaches a calling male on the ground, he will move toward her with his wings stretched upward, and will copulate if she allows it. There is no pair bond. The mating system is of the “promiscuous” variety; males will mate with any female that approaches and females may visit nearby fields and mate with other males.

The female lays her eggs in a small depression on the ground. Young are precocial and will run after their mother shortly after hatching. It is not unusual to observe a family crossing a highway, all bobbing up-and-down, but not at all in synchrony … quite a laughable performance!

Given its odd appearance and unusual habits, it is not surprising that the woodcock has been given a number of interesting common names. My favorite is “Timberdoodle,” but they are also referred to as “Bog Suckers” and “Night Partridges.” I’ve even coined my own name, “PeentMeister,” in celebration of the male woodcock’s nasal call.

All hail the PeentMeister, shorebird extraordinaire!

3. Aggressive cackles of male, given during encounters with other males: What You Can Do:

Watching the male woodcock’s sky dance should be on top of your “to-do” list if you live where woodcocks perform their courtship display. Check with a local birder to make sure they’re in your area. Males begin displaying as early as February in southern states and as late as April in northern areas. Find a nearby natural area where there is a healthy mixture of forest and clearings. Arrive around sunset and listen for the nasal peent calls of males in old fields that have been battered down by the weather.

When you locate a male, listen for the liquid twittering that tells you that a male has taken flight. Look in the direction of the sound and hopefully you will see his silhouette as he rises into the sky, beating his wings rapidly, and circling overhead. The best views happen when he flies toward the west and becomes visible against bright sky.

It is very difficult to follow a male for his entire sky dance; at some point he usually turns into a tiny speck and disappears into the darkness. But you should still be able to hear him. Listen for the onset of whimpering chirps that tell you he has begun to drop from the sky. Track his movements by ear and you may be lucky enough to see him as just before he levels off and glides along the ground before landing. Who knows, he might fly right over your head!

Once he has landed and begins giving peent calls, try walking slowly in his direction, shining your light every now and then, looking for the reddish reflections of his eyes. Most males will walk or fly away upon your approach, but you may find one who tolerates your presence and lets you get a good look at his ground display … his calling and wheeling around. What a treat that will be!

Occasionally, woodcocks may be spotted in swampy areas poking their bills in mud in search of earthworms. They’re well-camouflaged, so it takes a sharp eye to find one. In areas where they migrate, small flocks may sometimes be seen feeding along the edges of roadside ditches. You never can tell when you might come across a female with young … and if you don’t startle her, you might get a great view of the troupe as they plod along through the woods, cross a road, or walk across a grassy lawn. If you’re lucky enough to see mom and her chicks, you’ll no doubt remember it for the rest of your life.

Join Sharon Stiteler, the Bird Chick, in her quest to find Mr. Woodcock:

Notes from the Author (Lang Elliott):

Gathering the footage featured in the video vignette was quite a production. First I had to locate a displaying male that was fairly tolerant of light. That was no small job. Next I went to the hardware store and bought two powerful, portable spotlights of the type used by sportsmen.

Then I convinced two of my friends to accompany me on a “woodcock adventure,” of the likes they were unlikely to anticipate. We arrived on location at around sunset and quickly assembled at the end of a field, where my tolerant male generally did most of his displaying.

We waited as darkness unfolded. Soon the male flew in, landed, and began peenting. With a small flashlight, I was able to show the others his location. Then, when I gave the signal, the lights went on … the main light giving direct illumination and the fill light filling-in the shadows.

I can’t remember how many times we repeated this procedure, but nearly always something went wrong. Either he would move out of the light, face the wrong direction, be hidden behind a stem, or I would goof up with the focus or framing.

Finally, though, everything went right. The woodcock gave a number of peent calls as he wheeled around in a complete circle, and then took flight with an excellent side view. We wrapped up the project with big giant smiles on our faces, and the woodcock was seemingly unaffected by our antics (he was going strong as we packed our gear to leave).

My last words were: “Thank you Mr. Woodcock for all your patience, and know that we are very sorry about throwing all that light in your direction. Hopefully, our video vignette will do you and your fellow woodcocks more good than harm!” Knowing the place and the hour, you seat yourself under a bush to the east of the dance floor and wait, watching against the sunset for the woodcock’s arrival. He flies in low from some neighboring thicket, alights on the bare moss, and at once begins the overture: a series of queer throaty peents spaced about two seconds apart, and sounding much like the summer call of the nighthawk.

Suddenly the peenting ceases and the bird flutters skyward in a series of wide spirals, emitting a musical twitter. Up and up he goes, the spirals steeper and smaller, the twittering louder and louder, until the performer is only a speck in the sky. Then, without warning, he tumbles like a crippled plane, giving voice in a soft liquid warble that a March bluebird might envy. At a few feet from the ground he levels off and returns to his peenting ground, usually to the exact spot where the performance began, and there resumes his peenting.

It is soon too dark to see the bird on the ground, but you can see his flights against the sky for an hour, which is the usual duration of the show. On moonlight nights, however, it may continue, at intervals, as long as the moon continues to shine …

Reproduced with permission of Wisconsin Agriculturist, where the essay first appeared. 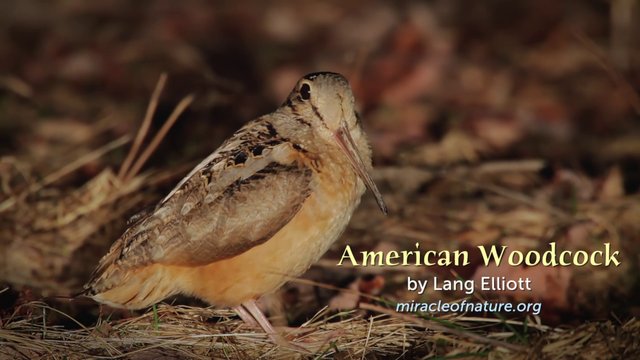 A multimedia celebration of the American Woodcock, featuring the male's amazing courtship display. Brought to you by old-miracle.mystagingwebsite.com.